MCOB has a history of strong lay leadership in the church. For most of its existence MCOB shared pastoral duties among lay members working with the Church Council, a group of regular participants. Numerous committees, including the Church Council and the Worship Committee continue to play a significant role in the leadership of MCOB and the planning of weekly meetings throughout the year. Beginning in 2009, MCOB welcomed Nancy Frey as our half-time pastor. In the fall of 2012, we welcomed Bruce Bradshaw as our pastor, serving in a half-time role. MCOB is appreciative of Bruce’s service and the gifts that he brings to the congregation.

Bruce Bradshaw, who has served as the Pastor of the Mennonite Congregation of Boston (MCOB) since September 2012, has dedicated his professional life to Christian service, starting with Eastern Mennonite Mission in Somalia from 1985 to 1988. 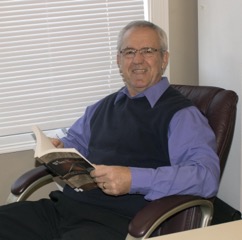 He continued his love of international ministry by working with World Vision for 12 years, where he lived in California and travelled to various countries in Africa, Asia and Latin America. He continued his work in Christian service by teaching at Bethel College, North Newton, KS, and serving as the pastor Zion Mennonite Church, Elbing, KS.

Bruce came to MCOB while serving as the pastor of Arlington Street United Methodist Church, Nashua, NH, an appointment he still holds. He enjoys the unique opportunity to serve churches in two different denominations, appreciating each one more because he has the other one.

When Bruce is not busy with family and congregational work, he enjoys reading, writing, gardening and bicycling. He completes a few 100-mile bicycle rides each year; finds energy in cultivating plants and owns more books than he will ever read.

Bruce and his wife, Mary, have been married for over 35 years. Their family includes Ellen and Rob, Amy and Eden, and Phillip, and their granddaughter, Abbie. Mary has had a distinguished career in teaching English to Speakers of Other Languages; she has interests in international education, which have brought her to various countries in Europe, Asia, the Middle East and Latin America.